Language is an important way of communication for us humans. When children do not (learn to) use language as expected, this is usually noticed relatively early on and is reason for grave concern of the parents. There may be a variety of reasons why children don’t, or won’t, speak. And in an international, multilingual environment, any of these reasons may be harder to identify and understand. One of the reasons some children do not speak is because they suffer an anxiety disorder called Selective Mutism. And as October is known as ‘Selective Mutism Awareness Month’, today I will explore what Selective Mutism is. 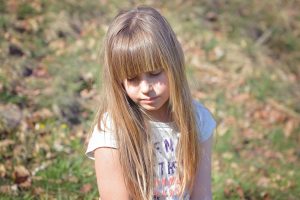 What is Selective Mutism?
Selective Mutism is an anxiety disorder characterized by an inability to speak in some situations, some places or to some people while the person suffering from selective mutism can speak well in other situations or to other people.

The main characteristics of selective mutism (as defined by DSM-5) are:

– Not talking in situations where it is expected the child will talk
For example, a child with selective mutism may speak at home but not outside of the home. Or they may speak to family and friends but not to strangers. In rare cases it may be the other way around; they may speak outside and to strangers, but not at home with family members.

– The silence interferes with the child’s functioning at school or in their social life
If a child is not talking to their peers in the park, and speaks (to peers) in other situations, it is a challenge but not necessarily a problem; it does not constitute a risk for the child’s development overall.

However, in many situations the silence does become a problem for the child’s further development. If a child does not speak in school it will be hard for them to participate and for the teacher it will be hard to evaluate whether are ready to proceed to the next stage. It will also be harder for them to make and maintain friendships, although children can sometimes succeed in this area with strong non-verbal communication skills.

– The child does not speak in those situations for at least one month
Many children experience a short period of silence after a big transition. For example, some children do not manage to speak much, if at all, the first month in school, because they need to get used to the situation. If the child speaks the (school) language this period should last no more than one month.

– The child otherwise is known to be familiar with the language
If children are not familiar with the language, it is to be expected that they do not manage to speak much in the first period. Multilingual children who start school in a new language may experience what is commonly referred to as ‘the silent period’. This silent period may take longer than one month because it may take longer than one month before the child feels familiar enough to speak the new language. Dr. Ute Limacher Riebold wrote more about the silent period and how you can support your child through this.

– There is not another communication disorder that better explains the child’s silence
Silence in children can be caused by other difficulties such as language acquisition problems, stuttering (in combination with shame/anxiety) or communication disorders such as autism spectrum disorders. If you suspect your child may be suffering from Selective Mutism, it is important to find mental help services that can help you rule out other possibilities.

An anxiety disorder
One of the most persistent myths about children who do not speak is that they refuse to speak in a way to exercise control over a situation. It is easy for parents, educators and other supporters to assume that the child has control over their speech, especially when they are so verbal in other situations. Sometimes children are characterized as stubborn or oppositional, because if they have control over their abilities to speak and are inhibiting their desires to speak, they must be quite persistent.

However, in most – if not all – cases of children who are not speaking in certain situations anxiety is involved. Selective mutism therefore is categorized as an anxiety disorder. Anxiety, as you might recognize from yourself, has the tendency to make your muscles feel tense. To children with selective mutism, this may happen when they want to speak, tensing up the vocal cords so that they cannot produce sounds. As they learn this, they might stop making attempts to speak because they already know it will not work.

When we mistakenly assume a child has control over the situation, our response to it might be one of frustration. Unfortunately, this is exactly the opposite of what a child with anxiety needs in order to open up.

Do you worry your child might suffer from Selective Mutism? Find out about our support options and parent trainings.